In today’s world, information overload is a common term. We get pounded with advertisement, news, and a truckload of gossip. Ask any question in Google’s search engine box, and take a look at the responses you get. I bet you will get both sides of an argument, regardless of what question you pose. Keto or not, vitamins or not, vegan or not, what type of exercise works–what doesn’t?, etc. I chose physical fitness for my core topic here, but you get the idea. How do we sift through all this information to find the truth?

Unfortunately, it isn’t as easy as it sounds, typically because most of the voices online are in it for a profit, clicks, or some other selfish purpose. This is where critical thinking takes on a whole new meaning. Today, we all have to become critical thinkers to avoid being overwhelmed by masses of opinions that are just that–opinions. To arrive at some semblance of truth, we have to really dig, and examine what we are reading critically. Watch this short video to learn how.

I hope you enjoyed this video and will try out some of the things it suggests. Critical thinking is no longer relegated to the university. We must all learn how to critically think and choose our information sources wisely. If we do not, we will be easily duped by many on the internet who have no interest in telling us the truth, but are rather interested in gaining political points, selling us something, or perpetuating a rumor that is popular.

Have a great Tuesday, folks!

So much strife in the world. So much stress spanning the populations of the globe. COVID-19, racism, climate change, and corruption. How does one deal with all of this at the same time?

The simple answer—critical thinking. Think critically. It is a rare skill set these days, with most preferring to be puppets of the mainstream media, instead of thinking for themselves. Why? Because thinking is hard. Reading broadly is difficult. It causes us to face ourselves and the opinions of others.

Does it make sense that all law enforcement is racist? What police chief in the United States would enjoy having a police officer in his police force that would do such a horrific thing so publicly? The answer: None of them would. Think critically. Who would benefit from a racist police force, when the result is the destruction of our cities, assault of innocent people, and general disruption of society? The answer: No one. It is a no-win for anyone involved.

COVID-19 shut the planet down. Was that prudent? You bet. The problem arises, however, when the riots began in the United States. If social distancing and remaining closed is so important, why were these policies tossed aside after the first Molotov cocktail was thrown? Why are the numbers in countries and states that remained open or opened recently, not in alignment with the models being used by the CDC for most of the pandemic? Think critically. What makes sense? What doesn’t? Who benefits by the shutdown of society? Who doesn’t benefit?

Climate change advocates chant “trust the science”. We trusted the science during the COVID-19 crisis, only to find out that most of the models we were using were outright wrong. Do you still want to trust the science? I don’t know. That’s a personal decision. Think critically. Who benefits from the changes required to counter the effects of climate change? Who is hurt by the changes suggested by science to curb the inevitable doom proposed by science? Think critically. Who benefits from supporting climate change? Do these same people abide by the same restrictions they suggest for the rest of us? Are they still using airplanes to get to their speaking engagements? Are they still staying in hotels? Are they still using limousines? Do they make any money producing the movies or documentaries that advocate policies that would thwart climate change?

I’m a huge advocate of avoiding the news. Why? Because it is really important that we control what we allow into our psyches. The media today is nothing more than click bate in most cases. They stress people out because anyone can figure out how to psychologically effect other people. When you have that formula mastered, are you telling people the news or spouting propaganda to influence the populace to your way of thinking?

You don’t have to tell me what’s in the news today. It’s the riots. It is the unrest in the United States. Everyone is stressed out. Companies and corporations are virtue signaling all over themselves, to preserve their profits and invoke some sort of sympathy from rioters to avoid trashing their businesses. The result: Nike’s stores are trashed in New York, with looters stealing their shoes. Starbucks stores are devastated with fires and damage. Target, a company which served as one of the primary repositories for goods for families during the pandemic crisis, are now being looted mercilessly doing untold damage to the local economies, the employees of these stores, and the local populations that depend on these stores for their livelihoods. Is virtue signaling helping anyone? I don’t know. That is a personal decision. Think critically.

Most folks in the United States are stressed right now. They don’t know what to do or where to turn, as their cities, highways, and normal lives have been thrown into chaos, while the media continues to support the narrative that society in general is racist, these people are just venting their pain, and we should just let them continue to destroy businesses, burn neighborhoods, shut down highways, and terrorize the very neighborhoods that suffer the most when their churches, transportation resources, and local businesses are shutdown or destroyed.

They are stressed because 40 million people (at last count) were forced to stay home and not work, so they could receive a measly $1200.00 check. They have been locked in their homes due to a “deadly” virus that now possesses less of a threat than the common flu. They have been told to social distance and wear masks, although now, it’s OK to ignore all these guidelines because people have a right to protest. Think critically. Does any of this make any sense?

Read broadly. Investigate. Don’t take everything you see and hear in the news as gospel. Form your own opinions, by weighing all the facts and applying logic to what you are seeing, hearing, and reading. The truth is out there, you just have to do the work to find it.

I do not advocate one position over another. The purpose of this post is to demonstrate that many of the challenges we face today are not as cut and dry as the left-leaning or right-leaning media would try to convince you to believe. I am merely offering a potential solution to our current right-wrong, opinionated, and divisive media. Avoid it at all costs. If you cannot avoid it, get out there and dig into the issue. Become an expert. Know what the left is saying, what the right is saying, and dig into the issue. My guess is that you will come up with some solution sitting somewhere in the middle of these extremes. 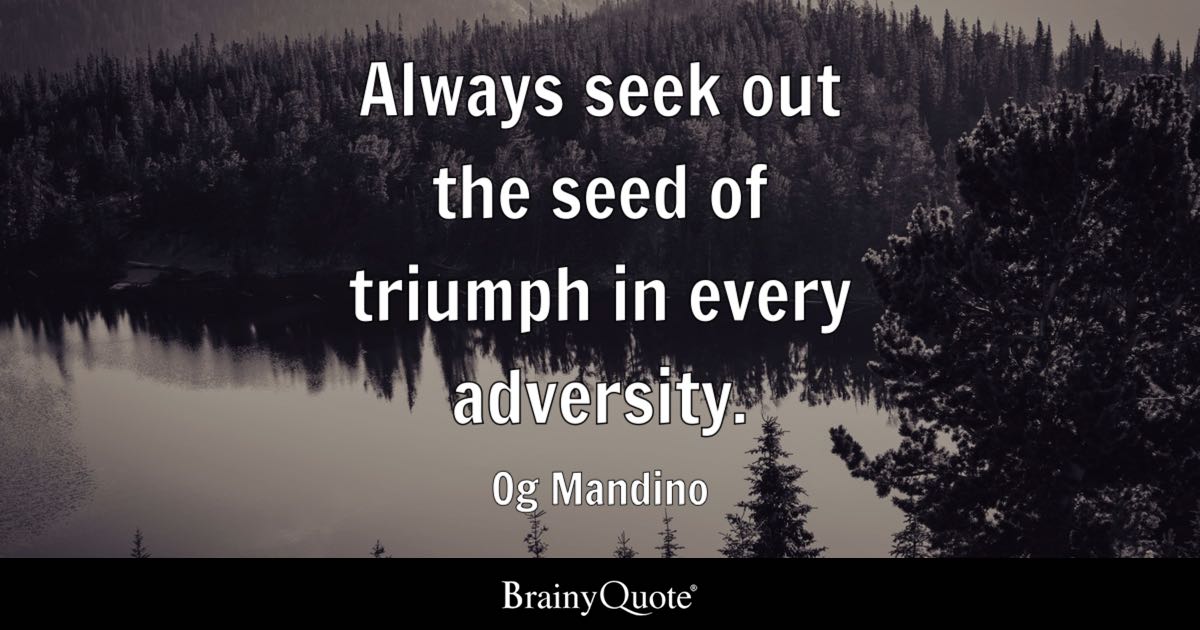 “Always seek out the seed of triumph in every adversity.” Og Mandino

We all have problems. We are surprised by unforetold losses. We are struck by random emergencies, causing us to scramble and struggle to recover.

Our opinions and attitude truly can be our greatest strength or greatest weakness. They are a strength if we learn how to react to life’s “surprises” like water does to any outside influence. The water reacts exactly to the input, be it a pebble, a bird landing for a cool bath, or the gentle breezes. When we can be like water we let the troubles roll off of our back. We maintain a detached attitude, realizing that our reality is what it is—nothing more—nothing less.

Think about how “freeing” this attitude is. It’s hard. It is really hard to forge an attitude that turns problems into helpful solutions to our unfoldment but that is exactly what each problem is. Problems are what we define them to be. If you change the definition you no longer have any problems.

I hope all of you are having a terrific week so far.